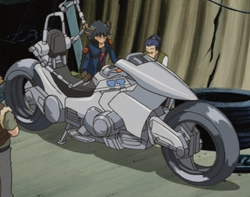 The Duel Runner, known as D-Wheel (Ｄ・ホイール) in the Japanese version, is a special Duel Disk extension, developed by KaibaCorp introduced in Yu-Gi-Oh! 5D's for Turbo Duels. They are equipped with a screen which shows details like the current duel field or the Life Points. It can approach speeds of up to 220 kilometers (136.62 miles) per hour during a Turbo Duel. In addition to this, other equipment like the helmet serve to display various information, such as the ATK of a monster. In each Duel Runner, there are two specific cards integrated: the Field Spell Cards "Speed World" and "Speed World 2". If this card is activated then the duel screen on the Runner will appear. Furthermore all other information irrelevant to the Duel, can be switched off. "Speed World"/"Speed World 2" also activates the Duel Disk, which is attached to the Duel Runner. Consequently Duel Runners have been seen to posses certain other distinctive characteristics seen on the series. Such to be mentioned are runners that are hybrids with Card Zones that can be detached and used as standard Duel Disks. Some that have sidecars with their own Card Zones attached for Tag-Team Duels. And to be pointed out its possible to have a regular duel on Duel Runners as long as "Speed World" is not activated.

The first Duel Runner made by Yusei Fudo. Jack Atlas stole it from him along with "Stardust Dragon" before leaving his friends. According to Jack Atlas it has since been destroyed. In Yu-Gi-Oh! 5D's World Championship 2009: Stardust Accelerator, this runner was not actually destroyed, but was actually being used to power an experiment in secret. The reason for this is unknown seeing as it was only seen in flashbacks.Yusei Fudo's Duel Runner, known as Yusei Go is similar to the first one he made, but colored in red, which is known to be a rare color. It is a hybrid built mainly from refurbished scrap metal of older runners. It includes a Duel Disk in the design of a Battle City Duel Disk. The Disc along with most of the runner's parts, including the latest top of the line marketed KaibaCorp acceleration chip: the Skyline 30; were either scavenged or stolen from sector security. Has been modified by Yusei and Bruno with their new engine program in order to compete in the WRGP. Yusei believes this upgrade will also help him achieve Accel Synchro. In Yu-Gi-Oh! 3D Bonds Beyond Time, Jaden Yuki asks Yusei about "Yusei Go" being the Duel Disk of the future. 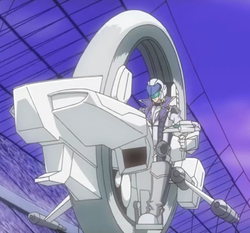