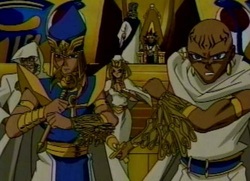 The Duel Disk is based on an ancient Egyptian artifact called a DiaDhank, a
golden device worn similarly to the Duel Disk that uses the user's Ba (Life Force) to summon Ka (spirit monsters) and control them.Unlike the Duel Disk, the DiaDhank can only control up to 3 monsters at once. In place of the Life Point counter is the Eye of Wdjat, which contains a glowing yellow meter that measures the user's Ba, as the disk measures life points.Since summoning monsters drains life force, the losing duelist faints or dies. It is heavily implied only Millennium Item bearers can use a DiaDhank. 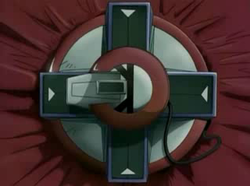 During the Duelist Kingdom arc, Seto Kaiba developed the first generation duel disk prototypes as a means of countering Maximillion Pegasus' mind reading techniques.Seto gambled that Pegasus needed face to face contact for his mind reading to work so as a feature of the disks, holographic projections of the cards obstruct the duelists from seeing each other.This duel disk was physically and functionally different than the ones that would follow. Where the others are a single piece construct which houses the Deck, Graveyard, Life Point counter and Field, the first Duel Disk system had 2 components joined by a retractable cable.The wrist component houses the Deck, Life Point counter and the actual disk component holds 5 cards. Users would load the cards as explained later into the disk and throw it like a yo-yo, causing a hologram to be projected from it. 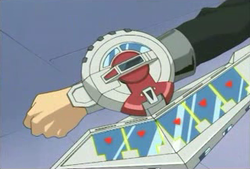 Prior to the Battle City Tournament, KaibaCorp developed the second generation Duel Disk, the first one to be released to the public. Issued to participants of Battle City, this Disk played the game according to the new revisions (which make it closer to the real world version.)Unlike the previous Duel Disk, it did not need to be thrown (In the Yu-Gi-Oh! anime, sealers flew out of the Duel Disk to the sides of the dueling area. These disappeared in Yu-Gi-Oh! GX). When in use, it resembled an arm blade. Monsters that are in play are placed on the 5 slots on the blade. Directly underneath each Monster slot is another slot for Spell and Trap Cards. If a Duelist were to activate a Set card, they would activate a button on the round portion of the disk. Another slot can open on the front end of the disk that is used for the Field Spell Card.The center of the Disk includes the Deck and Graveyard slot and Life Point counter. The bottom part of the disk (the part that goes around an user's arm) also contains a retractable cable that could be attached to Dueling Arenas if one player opted not to use a Duel Disk. 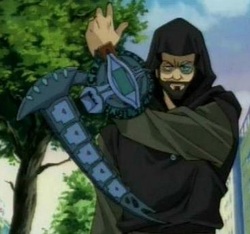 The Chaos Duel Disk is a Duel Disk designed for the members of the organization called Doma in the Waking the Dragons arc. Functionally, it is identical to the Battle City duel disks.

A streamlined version of the second Duel Disk. This is the standard Duel Disk
issued to students of the various Duel Academies established by Seto
Kaiba in the Yu-Gi-Oh! GX series. Aside from the obligatory
alternate folding feature, and a cosmetic refit, this Disk functions identically
to the second Duel Disk. The shift from standby to active mode of this version
of the Duel Disk is much less pronounced than the Battle City variant, only
requiring the top section of the card platform to extend. 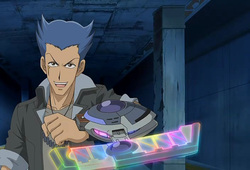 Duel Disks in New Domino City are sharper-looking than the previous types. Unlike previous Duel Disks, there is a chamber for the Extra Deck located on the opposite side of the spot where the Main Deck is inserted. In several episodes of the anime and in the opening intros, the Deck Zone is shown to be able to shuffle the Deck or eject cards that have been searched from the Deck while the cards are locked in.