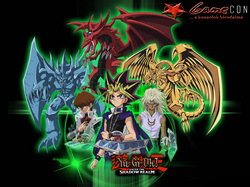 Yu-Gi-Oh! is a Japanese manga created by Kazuki Takahashi. It has produced a franchise that includes multiple anime shows, a trading card game and numerous video games. Most of the incarnations of the franchise involve the fictional trading card game called duel monsters (originally known as Magic & Wizards), where each player uses cards to "duel" each other in a mock battle of fantasy "monsters". The Yu-Gi-Oh! Trading Card Game is the real world counterpart to this fictional game on which it is loosely based.