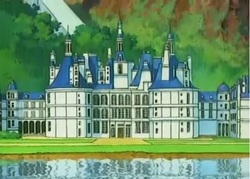 Obelisk Blue is the highest of the three dormitories at Duel Academy. The reason for its superiority over the other two dorms goes back to the fact Seto Kaiba is the owner of this school and that he possessed "Obelisk the Tormentor" during Battle City. While Obelisk Blue is considered to be the dorm with the best students although this is not necessarily true as Jaden Yuki is known as the school's top ranked duelist. The dorm is mostly made up of students who have connections and are rich. Luxurious interior design, high-quality rooming, and finer food are offered to the students who reside here. In order to enter Obelisk Blue, one needs to have high grades. In order to start in Obelisk Blue upon enrollment, not only does one needs to have high grades in the written examination but they also need to have earned a diploma from another duelist prep school.